A Nuzlocke hack made by a then-retired ROM hacker with little to no experience with the challenge. What could possibly go wrong? 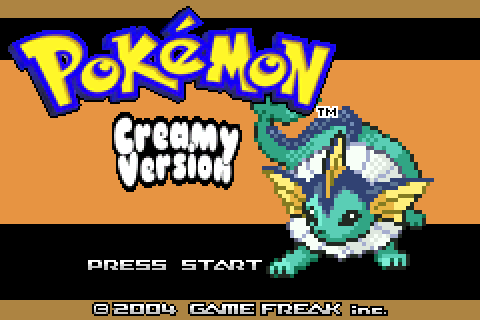 NOTICE: This is the proposed Public Release of Creamy. While some preliminary work has been started on it, it is unlikely that this remake will come out anytime soon. There are a number of reasons for this, a significant one being that I have another hack in the works already.

Creamy is an FR-based Nuzlocke hack that I created specifically for the streamer Kywil and the community he is a part of. Much of its design is purposefully lacking for some kind of charm, and a great deal of its custom content is directly inspired by community jokes or conversations during and outside of streams. While undeniably different than the game it's based on, Creamy is still FireRed at heart, and the story has not deviated too greatly from its basic structure. It is also my general hope that people from outside the community will still enjoy the humor, peculiar and often vulgar as it can be.

As Creamy is designed to be a Nuzlocke hack, the game becomes very difficult by the end, and employs a number of standard and custom rules that Kywil ultimately chose. New players will be able to customize their experience, however, to a great extent. If you would prefer a more difficult run with no items allowed, and/or the inability to run from wild Pokémon, then Creamy has you covered.

Gotta add some of those.


I do not own Pokémon. That distinction belongs to Nintendo, Gamefreak, The Pokémon Company, and so on. This is a fan work made for no profit and purely for the purpose of entertainment.